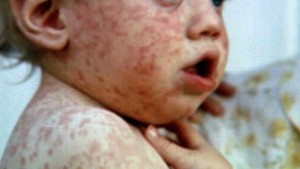 I have been following the situation around the rise in number of cases of vaccine-preventable diseases closely over the past few years, and I feel strongly it is time I summarize my feelings about this now.

In the past few years we have seen small epidemics of whooping cough (2010 and 2014 in California, and 2014 in Alberta), measles (2014 in Alberta) and more recently measles in Disneyland around Christmas time 2014 with ongoing new cases still in January 2015.
I have been practicing as a paediatrician for 10 years. In these 10 years the number of parents that are indicating they wish to postpone/change their child’s vaccination schedule or to not vaccinate at all, has grown. Let me be very clear in saying that it is still a small minority that do this, however the impact their decision has on not only their child but the entire community as a whole, cannot be underestimated.
The recent measles outbreak in North-America which was mostly related to an infected patient at Disneyland in California has reminded the world again how contagious measles are (1 measles patient can infect 15 others) and how people who are advocating against immunizations (the “Antivax movement”) are largely to blame for this.
Is the notion of groups choosing to not vaccinate new?
NO, it is not.
For many years there have been groups who choose not to vaccinate based on their religious belief (I freely summarize it as “it is in God’s hands”). I always maintain that the only thing that is hard to argue with is religion. Nobody can show them proof that God is asking them to vaccinate just as much as they can’t show proof God is saying to not vaccinate.
Those groups have maintained such a stance for many decades and in fact it did not cause too many outbreaks because the other people around them were vaccinated. This is called “herd immunity“. Herd immunity is effective for those unvaccinated ones if the percentage people getting vaccinated is roughly 93-94% or higher.
Unfortunately the Antivax movement has caused the percentage of people to be vaccinated in some provinces in Canada and  states in the US to fall to as low as 85%. This is causing a rise in the number of kids sick with vaccine-preventable diseases.
Why do you make a difference between somebody choosing not to vaccinate based on their religion versus any other reason?
What I do have a hard time accepting, is people that choose not to vaccinate based on information not supported by medical evidence. They can’t show me evidence that backs their claims while I can show multiple evidence-based facts that clearly show the benefits of immunizations. I do not stand alone in this. My claim is factual and is supported by the World Health Organization, Centre for Disease Control, Health Canada, American Academy of Pediatrics, Canadian Pediatric Society, and many more.
How did we get to this vaccine-hesitant frame of mind in some groups?
A. The first one that had (and in fact still has) a major impact on people’s choices to vaccinate, is the study by Andrew Wakefield in 1998 in which he claimed there was an association between MMR vaccine and autism. Please note that I did not post a link here as the study has been retracted because of fraudulent research, false claims and questionable ethics (to put it mildly). At least 20 other studies have looked at that relationship after Mr Wakefield’s study, and none have found any causal relationship between MMR vaccine and autism. I repeat, there is NO evidence between MMR vaccination and autism. If you are interested in reading more on that story, a very detailed and excellent job was done by Brian Deer on this, which you can read more about here.
B. Then there are celebrities who are not medical doctors, but have a strong opinion for which they are receiving a platform. One of the more vocal celebrity advocates would be Jenny McCarthy who claimed that vaccinations caused her son’s autism. Amazingly she was given a large platform in the media even though there is no scientific evidence backing her statement. Jenny McCarthy is an expert on her son, but she is not a medical expert.
C. A journalist who normally tries to balance both sides of the coin on any topic, and who famously had her own colonoscopy aired (which actually increased people getting colonoscopies done by 20% !) got into some heat after tackling the issue of vaccines. Katie Couric did a segment on HPV vaccines and had such a skewed anti-vaccine portrayal of the matter, that she needed to issue an apology after.
D. Then there are those that believe offering a postponed (no medical evidence for that) or an alternative vaccine schedule is the better way to go. If you are considering such an alternative vaccine schedule I would suggest you read this excellent rebuttal to Dr Sears’ alternative vaccine schedule, written by 2 physicians and published in the Journal of Pediatrics in 2009.
So what have the combination of all these “incidents” led to?
A decline in vaccination rate, a decline in the percentage of vaccinated people needed to get herd immunity. And what has that led to? A resurgence of diseases that are vaccine-preventable and are now reminding us of how contagious they are.
Two stories that show the impact of not vaccinating:
Dad (and fellow pediatrician) Dr. Tim Jacks wrote an excellent piece on how a recent exposure to measles has affected his family (they have an immunosuppressed daughter undergoing chemo treatment for leukemia and a 10-mth old baby boy who has not received his MMR vaccine yet). You can read his article here about the impact parents who DON’T vaccinate their children have on parents who CAN’T vaccinate theirs.
The world-famous children’s books author Roald Dahl described in a letter in 1988 how he felt about vaccine-preventable diseases after he lost his 7-yr old daughter to measles in 1962.
Sometimes cartoons can be very impactful. New Yorker cartoonist Emily Flake tried to depict it as follows: 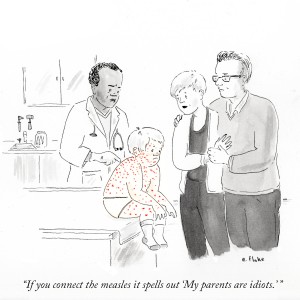 So where does that leave me, a community pediatrician seeing primary care patients (this means healthy babies too) as well as consultations (some of which are immunosuppressed children, premature babies and babies with complex congenital heart disorders)?
What should I do when a family indicates they do not wish to vaccinate?
And how do I protect my patients (both the vaccinated and the unvaccinated)?
This is not an easy question to answer, but I will attempt to do so.
First and foremost I strongly believe all kids should be vaccinated according to their regional vaccination schedule. This is supported by medical evidence over decades of research (as per WHO, CDC, Health Canada etc). It is also important to note there is still ongoing research into vaccines we give and any potential adverse events they might have.
I will always ask a new family if their child is uptodate on their immunizations. If they answer that they do not vaccinate I open the dialogue as to why they don’t. I will then give them the data on benefits of vaccinating, what the medical evidence is and what the most common side effects are. I will give them this handout by the Canadian Pediatric Society (CPS) and I will encourage them to read it at their leisure, and that they can come back with questions about this any time.
There are some colleagues who will discharge families if they don’t vaccinate and/or not accept families that don’t vaccinate. Whereas I understand where those physicians are coming from, I feel I have both a legal and moral obligation to the parents and their children to continue to serve them. In 2007, the CPS published an excellent article on the legal aspects of this.
Personally, I feel I need to protect ALL my patients, those who are vaccinated, those who are not vaccinated yet, and those whose parents chose not to vaccinate them (after all, it’s not the kid’s fault).
Some have suggested to have a separate waiting area for unvaccinated kids. Not only is that physically impossible in most existing community office spaces, it also increases the chance that one unvaccinated child with a vaccine-preventable disease will infect the other unvaccinated children who are in same waiting room. For that same reason I would also not schedule them at an “after-hours time slot”.
So what have I done and what will I continue to do? I will continue to keep the lines of communications open with my patients and their parents. The CPS published a guide for health providers how to work with vaccine-hesitant parents. I will do my best to educate them on vaccines and encourage them to do it. I will try as best as I can to protect ALL my patients. I will ask those parents of unvaccinated children to remind my staff on the phone when calling in with fevers and rashes that their child is not vaccinated. In those instances, I will put the kids into an exam room immediately and if clinically suspected or confirmed , not use that room for the rest of the day and disinfect it.

Here are 6 take-home messages I would like to leave you with:
1. Vaccinating your child is important and proven to be of benefit and is safe (supported by medical evidence). Saying your child does not need vaccines because he is always healthy, is like saying you will not wear a seatbelt because you will not be in a car accident.
2. Vaccinating your child is an important civic duty and contributes to a healthy society. It is important to remember that we are not only protecting the patients we are vaccinating, but also those who cannot be vaccinated.
3. As a physician, it is important to keep the lines of communication open with your patients. Sometimes it takes multiple visits, questions raised and answered for vaccine-hesitant parents to come to the realization that indeed vaccines work and are safe.
4. Everybody, and I mean EVERYBODY (vaccinated and unvaccinated) should stay home if they suspect they have a communicable disease and call a healthcare provider for further advice. This helps to keep these cases from evolving into an epidemic.
5. Just because celebrities might be people you see/hear a lot of in the media, does not make them medical experts overnight.
6. It is my hope media will cover the horrible effects the Antivaxers have caused just as much (or more) as they have covered the false claims.